I’ve already said Remainers should get their balls back, but now it’s time for Brexiters to do the same.

As we all know, Brexit campaign leaders pledged – it was emblazoned on the side of their frigging campaign bus FFS –  to spend £350 million a week on the NHS. But with breathtaking disdain for their supporters, the very next day after the vote was won, Johnson, Farage, Grayling et al casually dropped the pledge.

But even more amazingly, when they did it, there was not so much as a peep of protest from Brexit supporters – the very people who had been lied to.

And now we’re being told – despite Brexit – not only is £350 million a week not going to be spent on the NHS, but the NHS is actually facing drastic cuts.

And still no whisper of protest from Brexiters.

We were also promised by the Leave campaign that the UK would regain control of its borders and put a stop to unchecked immigration from EU countries. But just a few days ago, Brexit campaigner and cabinet minister in charge of Brexit negotiations David Davis said there would categorically be no closed border and no border checks on the UK’s only land border with the EU, in Ireland: 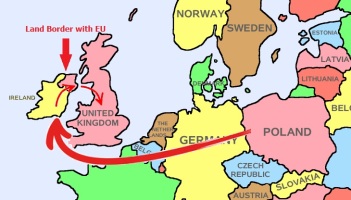 This means EU citizens from Poland (for example) and other EU countries will be able to enter the UK unchecked within a couple of hours for as little as £25.

And still not a squeak of protest from lily-livered Brexit supporters at the broken promise and the shameless lies.

What’s wrong with Brexiters? Are they all so scared of their own campaign leaders they daren’t stand up to them?

Maybe their timidity stems from a feeling of inadequacy because most Brexit campaign leaders went to public schools and most Brexit voters didn’t. Or are Brexit supporters all so bowed and cowed and used to tugging their forelocks at their so-called ‘betters’ that they allow them to walk all over them?

Of course, I might be wrong and in the next few days Boris Johnson may be about to receive 17.4 million messages of protest from Brexiters at his broken promises and his shameless lies.

But I won’t be holding my breath.