The threat to Jews from antisemitism comes almost exclusively from the Right, not the Left. Research shows this to be a fact:

But in order to smear a Labour leader that was threatening the influence and power of a few billionaires, the press in the UK – helped by centrists, Tories, Lib Dems and a handful of people in Labour who simply wanted to replace their leader – managed to convince most people that the threat of antisemitism comes from the Left, specifically from Labour.

This is not true.

In the last couple of years I have shown – with research – that antisemitism exists in the UK but is almost exclusively a right-wing phenomena:

While many normal people shared my research on line – nobody in the establishment was interested. Because it didn’t fit their agenda of smearing Jeremy Corbyn – who is not remotely and has never been an antisemite.

Indeed, mostly for petty party political reasons, celebrities and press have manipulated the facts to fit this agenda, ignoring the real facts that show antisemites in the UK are overwhelmingly on the right.

One quick example. Did you hear that Luciana Berger left Labour because she was being harassed by anti-semites?

Then you may be surprised to know that the people attacking here were not Labour supporters at all. They were from the hard-right. Here’s one:

And now, after all these false antisemitism smears against Labour, with Johnson’s victory we are seeing a rise of real antisemitism from the Right:

And a quick scroll through the cesspit of names I monitor of antisemites who are active online in the UK show to a man (they’re almost all men) they are wholeheartedly celebrating Boris Johnson’s victory.

Indeed, well-known anti-semite supporters such as Katie Hopkins are encouraging their own supporters to join Johnson’s party to ‘shore up’ the far-right extremism now engulfing our country.

You didn’t know Katie Hopkins is a supporter of anti-semites? Here she is with a Holocaust denying pal of hers, who thinks she’s “lovely”: 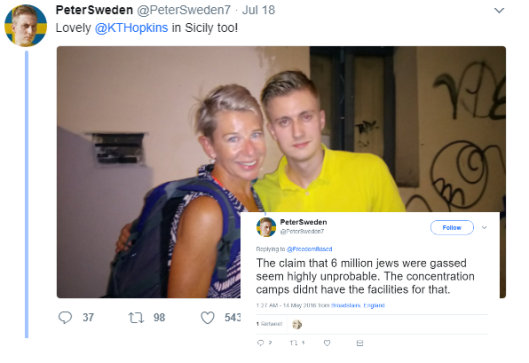 I am the grandson of a Holocaust survivor. My father’s father came to the UK from Austria to escape the literal firestorm that was engulfing millions of Jews and others on the mainland of Europe. For more of my family’s story read this:

But now we see the opposite happening.

The Holocaust survivor’s son, my father, has already told me he is washing his hands of the UK – directly as result of this far-right madness taking hold in the UK – and is seeking permanent refuge in another European country. He is in his 80s and has said he will never set foot in the UK again. He is scared.

I have also decided to move permanently to another country in the EU.

But as a born and bred Brit, that doesn’t mean I will be turning my back entirely on Britain.

So don’t expect to see the back of me.

16 thoughts on “While antisemites cheer Johnson, this Holocaust survivor’s family is fleeing Britain”