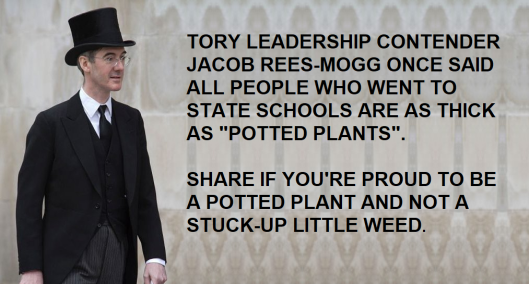 Tory leadership contender Jacob Rees-Mogg said today he believes women who are raped should be forced to give birth to her rapist’s baby.

Rees-Mogg also once spoke at a dinner to a far-right group which thinks Baroness Doreen Lawrence should be ‘repatriated’.

And the Eton educated son of Lord Rees-Mogg once complained that there aren’t enough Old Etonians in the House of Commons and reckons that people who went to a state school are as thick as “potted plants“.

That’s you and me he’s talking about folks.