There are so many Tory Party members openly arguing on various media about Cameron’s EU deal, it’s impossible to show all of it.

Here are just a few tweets from Tory MPs within the last few hours alone (click to enlarge): 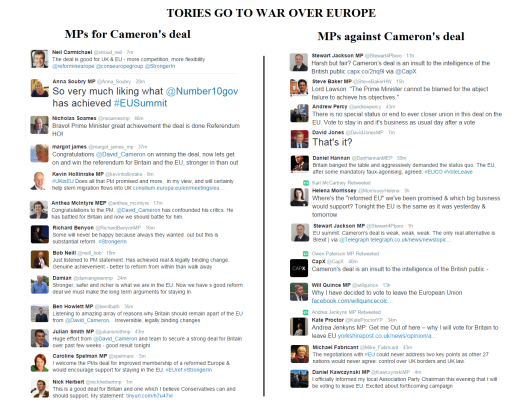 Hate to tell you Cameron, but I think this is what they call civil war …

I campaigned for an EU referendum after a fundamental renegotiation process. David Cameron has totally failed to deliver latter Vote#Brexit

The Daily Mail is eye-wateringly excoriating about this thin and inadequate deal https://t.co/VrxM1eZKZ3

Fantastic to see PM has met his EU commitments. Just a shame those commitments were tosh from the start. Come on @BorisJohnson!

Why I am backing #brexit https://t.co/mmPfxkBcUK

Reiterated on @BBCRadioLincs that many of 81 who voted for Referendum sincerely hoped for meaningful renegotiation & to vote in.Disappointed

The choice at the EU referendum is clear: if you want Britain to be an independent, sovereign nation vote leave; if not, vote remain.

Some of the guff being written by some colleagues today about how this deal secures our borders is just laughable. Our borders remain open

Cameron has done his best but the concessions he's won are minor and there's no real prospect of reforming the European Union.