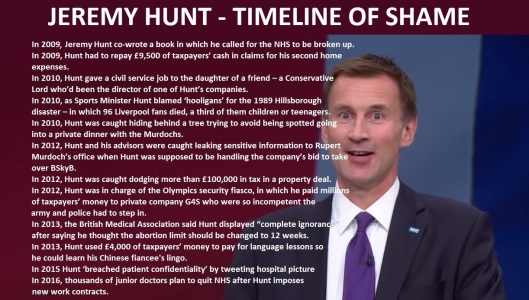 In normal circumstances, openly calling for the dismantling of the NHS would usually exclude someone from being put in charge of it.

Not in Theresa May’s cabinet.

In 2009 – before he became Secretary of State for Health – Jeremy Hunt co-wrote a book in which he called for the NHS to be broken up:

Top Tories call for NHS to be dismantled

Once he got the job you’d have thought Jeremy would have at least got to know something about the basics of health care, such as patient confidentiality.

Just looking at the sheer number of scandals Jeremy Hunt has been involved in, it’s hard to understand how he’s managed to keep any position in the cabinet:

In fact, multi-millionaire Hunt also likes to make absolutely sure taxpayers pay him for everything, including:

And what do we get in return for all this money we’re paying out to him?

A Health Secretary who’s breaking up the NHS and privatising hospital services, has managed to alienate the entire NHS workforce and who’s so incompetent it’s gone global.

Just another of the incompetent Tory clowns now running our country.