Defence Secretary Gavin Williamson is trying to display how tough he is by expressing his “concerns” about Chinese conglomerate Huawei investing in UK communications infrastructure:

Funny how Williamson hasn’t previously expressed ANY concerns AT ALL about his own party selling off other infrastructure to the Chinese: including our gas, water, rail, electricity …

…  as well as not mentioning how his own former Chancellor George Osborne along with Gavin’s present fellow cabinet member Amber Rudd, went to China in 2015 to encourage the Chinese to build a “string” of nuclear power plants across the UK: 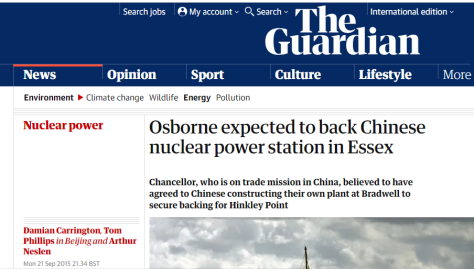 In fact, the Conservatives were strongly urging the Chinese to invest in British essential infrastructure such as nuclear energy, at a time the US and Australian governments were openly BANNING Chinese conglomerates from investing in their essential national infrastructures exactly because of national security concerns: 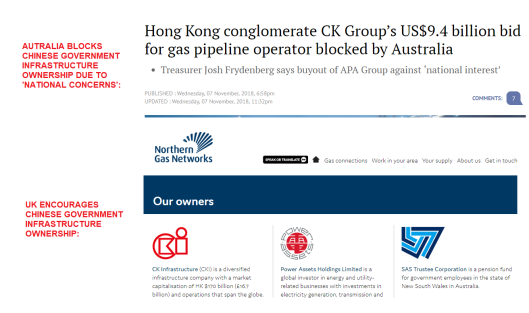 I’m guessing Gavin is hoping – with the help of a compliant press – that this hypocrisy isn’t noticed by the voting public.

So best keep it to ourselves then.

5 thoughts on “If Chinese conglomerates cannot control our phone networks – why have the Tories sold off our NUCLEAR POWER to the Chinese?”