Harry Phibbs is a journalist who writes for the the influential Tory grassroots website Conservative Home, as well as for the Daily Mail.

In 2014, Phibbs wrote a bizarre article in which he proposed abolishing the Health and Safety Executive:

But Phibbs also happens to be a councillor in Hammersmith and Fulham, right next to the area where the Grenfell Tower tragedy took place.

And remarkably, Phibbs is Tory housing spokesman for the London borough: 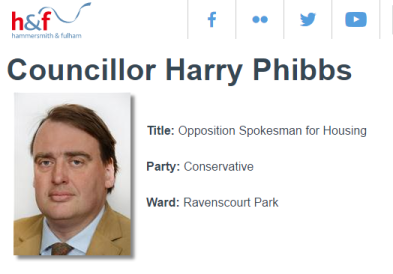 This may give us some insight into the mindset of his fellow Tory councillors in the neighboring borough of Kensington, who allowed one of their tower blocks with hundreds of families living in it to be clad in flammable panels with no water sprinklers or emergency exits to protect them.