David Cameron’s top adviser Steve Hilton has called for Theresa May to resign just days before the election over her responsibility for cuts to front-line emergency services:

Hilton however was immediately attacked by Tory MP Nadine Dorries who put the blame fairly and squarely on Cameron and Osborne for the disastrous cuts: 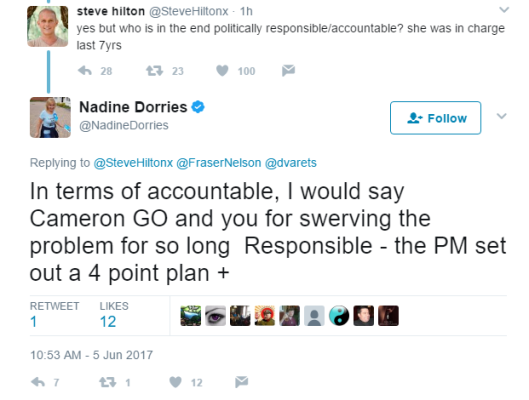 Of course, Theresa May was Home Secretary under Cameron and Osborne when she made drastic cuts to frontline emergency services:

For the last seven years we have seen drastic cuts by the government to all of our emergency services:

96% of hospitals have nurse shortages

Shortage of paramedics in London

Yet Theresa May claims there is enough money to give tax breaks to billionaires:

Theresa May also said after the latest terrorist attacks: “enough is enough”.

Most sensible people would absolutely agree.

Enough of her cuts to our essential services!

17 thoughts on “Top Tories publicly SQUABBLE over responsibility for police cuts: calls for Theresa May to RESIGN”