Theresa May’s secretive plans to replace the NHS in England with private US healthcare system Kaiser Permanente have been revealed just in time for the election.

Interestingly, Kaiser appears in a transcript of a conversation between disgraced US President Nixon and an adviser on one of the infamous Watergate tapes: 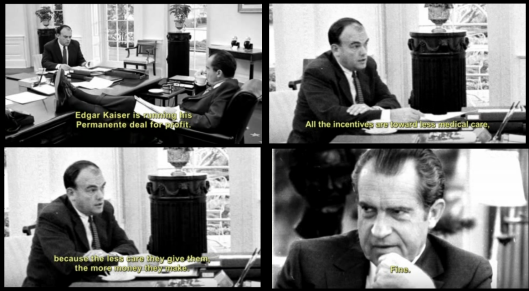 The secret conversation shows clearly that Kaiser’s goal is to make as much profit as possible by providing as little healthcare as possible:

Ehrlichman: —we have now narrowed down the vice president’s problems on this thing to one issue and that is whether we should include these health maintenance organizations like Edgar Kaiser’s Permanente thing. The vice president just cannot see it. We tried 15 ways from Friday to explain it to him and then help him to understand it. He finally says, “Well, I don’t think they’ll work, but if the president thinks it’s a good idea, I’ll support him a hundred percent.”

Ehrlichman: Well, everybody else’s judgment very strongly is that we go with it.

Ehrlichman: And, uh, uh, he’s the one holdout that we have in the whole office.

President Nixon: Say that I—I—I’d tell him I have doubts about it, but I think that it’s, uh, now let me ask you, now you give me your judgment. You know I’m not to keen on any of these damn medical programs.

Ehrlichman: This, uh, let me, let me tell you how I am—

Ehrlichman: This—this is a—

President Nixon: Well, that appeals to me.

Ehrlichman: Edgar Kaiser is running his Permanente deal for profit. And the reason that he can—the reason he can do it—I had Edgar Kaiser come in—talk to me about this and I went into it in some depth. All the incentives are toward less medical care, because—

Ehrlichman: —the less care they give them, the more money they make.

Ehrlichman: [Unclear] and the incentives run the right way.

This is the real nature of the system being lined up by the Theresa May government after the election.

To replace the NHS in England with a private US healthcare system interested only in making a profit.

More on Kaiser Permanente – the healthcare system being lined up to take over the NHS in England – and Watergate: