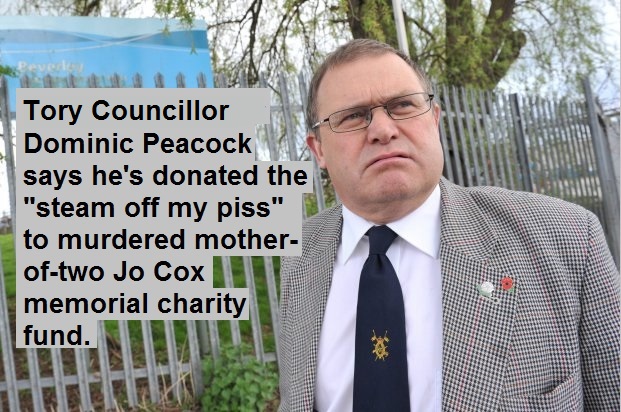 East Riding of Yorkshire Tory Councillor Dominic Peacock who shared a link to the memorial fund of murdered MP Jo Cox with the insenstive comment that he had donated the steam off his piss photographed at the Beverley Sewage Treatment Works. See Ross Parry copy RPYCLLR : A Tory councillor has caused uproar after disgracing Jo Cox’s memorial fund by saying he had just donated – the steam from his PISS. East Riding of Yorkshire Councillor Dominic Peacock took to Facebook to ridicule Jo’s mass of donations which have been received around the world. The late Labour MP’s memorial reached £1m donations today (Tues) – but it was met with an unsavoury tone from Cllr Peacock, a Conservative Councillor for Minster and Woodmansey. Along with a link to the Jo Cox fund, Cllr Peacock posted: I’ve just donated the steam from my piss.

This site uses Akismet to reduce spam. Learn how your comment data is processed.