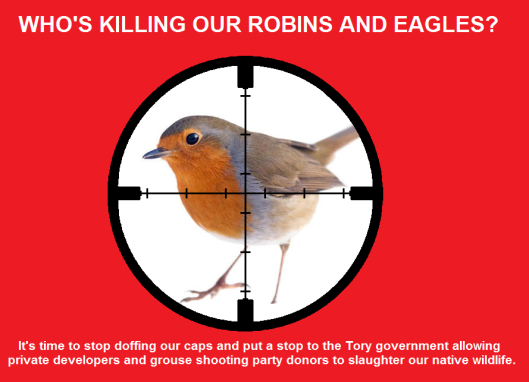 At least eight rare, protected golden eagles have “gone missing” since 2011. All were nesting near grouse shooting estates and must have had their electronic tags removed.

This is no mystery. Illegal traps – which target eagles and other birds of prey – have been found on and near the same grouse shooting estates.

Shockingly, there are only three breeding pairs of another native bird of prey, hen harriers, left in England when there should be around 300. Hen harriers are also regarded as a threat by gamekeepers to their grouse shooting estates.

In 2014, the body which is supposed to protect wildlife, Natural England, allowed robins and starlings nests and eggs to be destroyed by developers and landowners for the first time, because they claimed the birds posed a “public health and safety” hazard.

Robins and starlings nests are obviously not a hazard to public health and safety.

The truth is that they are protected birds, which means if nests are found by a developer,  then any building works on the site must stop until the birds have completed breeding.

Coincidentally, private developers are big Tory party donors. And so are grouse shooters.

Not long before the decision to allow developers to destroy protected birds nests, Tory ministers chose Andrew Sells –  who coincidentally happens to be a property developer – as the new Chair of Natural England.

Also coincidentally – before he was chosen to be in charge of looking after England’s wildlife – Sells had donated hundreds of thousands of pounds to the Tory Party.

On top of all that, in 2014, – while cutting money to the poorest – the government decided to increase subsidies to grouse shooting estates. That means you and I are subsidising wealthy landowners and their grouse shooting with our tax money.

All of these horrifying facts raise just one simple question in my mind.

When are the British public going to stop doffing their caps and finally say  — ENOUGH IS ENOUGH?

And why not sign this petition to ban driven grouse shooting?

10 thoughts on “When are we going to stop doffing our caps and put a stop to the slaughter of our native wildlife?”