The two main Brexit campaigns seem to have a talent for attracting some extremely dodgy people.

Now the Grassroots Out campaign have announced the appointment of one Alex Deane as their Executive Director: 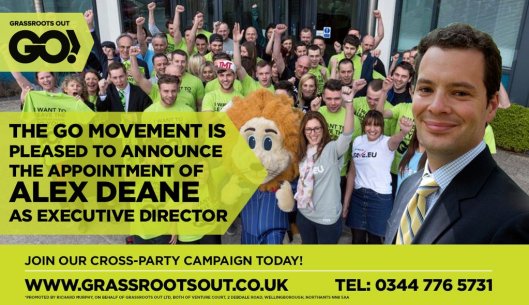 Alex is an extreme right-winger – a former board member of the Young Britons Foundation famous for wanting to scrap the NHS and which has now been closed down after being linked to the recent Tatler Tory bullying scandal.

Alex has also himself written in praise of a US style privatised health system, calling the NHS a “monolithic, money-guzzling health system”.

Alex is a bit tinfoil hat about climate change too:

“I am deeply skeptical about the assertions made with pseudo-certainty by the green crowd about the effects of man on the environment, and I regard the straight-faced, portentous predictions of apocalypse-next-Tuesday-unless-we-tithe-to-Al-Gore with a healthy dose of cynicism”.

Oh and he doesn’t donate to the RSPCA or the National Trust because they oppose fox hunting, he refuses to donate to Oxfam because he reckons it “opposes free trade” and he doesn’t like the NSPCC because it opposes hitting kids.

Can’t the Brexiters find any normal people to front their campaigns?