Well I think this may be unprecedented.

After the extraordinary decision by the Crown Prosecution Service not to prosecute Lord Janner for child sex abuse, Leicestershire Police are obviously so incensed that they have released an extremely strong statement on their official website from one of Janner’s alleged victims.

The man expressly requested that Leicestershire Police make his statement publicly available. So here it is:

“If he was an everyday person with a normal life and job, justice would [have] been served, but as it stands we victims are just being pushed to the ground again and walked over.

“Let someone feel the pain and suffering that I’ve endured and still going to endure for the rest of my life. It’s not a case of being found guilty or going to prison – it’s about being believed after so long being told that we were lying. Justice needs to be served.”

Can’t think why the CPS decided to prosecute Rolf Harris, for example, and not Janner. 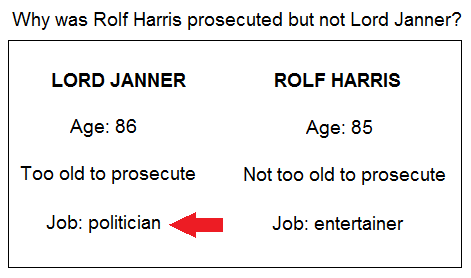 286 thoughts on “Police release extraordinary statement on Lord Janner: “this animal is still being protected””