But in all the years of watching politics, I have never before seen such vitriolic and personal attacks on a Labour leader – and even his family – that we have been seeing from the Daily Mail recently (warning – link to Daily Mail dross):

In fact, the attacks are so personal I’m even starting to think the unthinkable.

Could it be because Ed Miliband is Jewish?

Don’t be so naive to think there aren’t still members of the British establishment who really really hate the idea of somebody with a Jewish background being Prime Minister.

And after all, Rothermere and his newspaper the Daily Mail have a shameful history of anti-Semitism.

In the 1930s, the newspaper supported Hitler as well as Oswald Mosley and his British Union of Facists.

Here’s Lord Rothermere – the great-grandfather of the present owner – with a good friend of his: 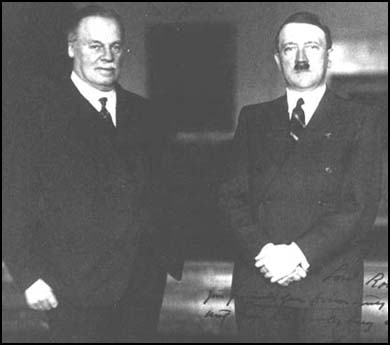 And here are extracts from an exchange of letters between the Mail’s owner and Hitler:

Adolf Hitler letter to Lord Rothermere (7th December, 1933)
I should like to express the appreciation of countless Germans, who regard me as their spokesman, for the wise and beneficial public support which you have given to a policy that we all hope will contribute to the enduring pacification of Europe. Just as we are fanatically determined to defend ourselves against attack, so do we reject the idea of taking the initiative in bringing about a war. I am convinced that no one who fought in the front trenches during the world war, no matter in what European country, desires another conflict.

Lord Rothermere, telegram to Adolf Hitler (1st October, 1938)
My dear Fuhrer everyone in England is profoundly moved by the bloodless solution to the Czechoslovakian problem. People not so much concerned with territorial readjustment as with dread of another war with its accompanying bloodbath. Frederick the Great was a great popular figure. I salute your Excellency’s star, which rises higher and higher.

But the Mail and its owner were not only supporters of Hitler – in the 1930s the newspaper was also itself openly and rabidly anti-Jewish.

Here’s an article showing what the Mail thought about Jews just one year before Britain was at war with Germany: 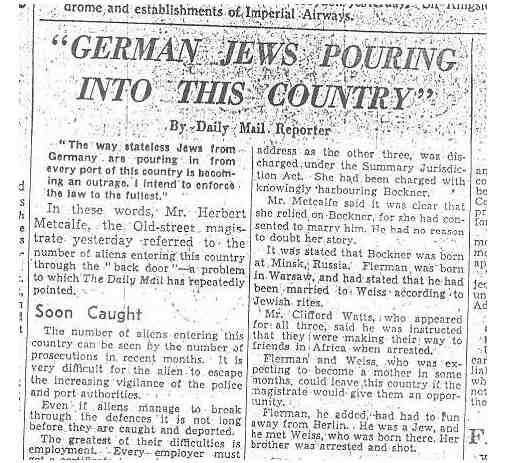 And of course, we all know the Daily Mail wrote a detailed article praising the UK’s version of Hitler’s Nazi Party – “Hurrah for the Blackshirts”.

But there’s more. The Daily Mail serialised the anti-Semitic hoax ‘The Protocols of the Elders of Zion‘ – a good ten years or so after it had been revealed to be a forgery.

Unfortunately though, this is not all in the newspaper’s past.

And as recently as this month, the Mail wrote an article praising a rising far-right fascist group in Germany whose leader likes to dress up as Hitler.

Are we really to believe that the present Lord Rothermere – like his relatives – doesn’t realise how anti-semitic those parties are?

Of course, it’s just possible that Rothermere has had a sudden change of heart and has reversed decades of family tradition by suddenly loving all things Jewish.

28 thoughts on “Unthinkable? Could Lord Rothermere’s vitriolic attacks on Ed Miliband be because he’s Jewish?”