David Cameron has announced the UK’s terror threat level has been raised from “substantial” to “severe” in response to an attack on him by militants at an Age UK conference earlier today.

The new alert level rates the risk of an attack by OAPs on the UK PM “highly likely”, although the Home Secretary Theresa May said there was no evidence to suggest another ambush on Mr Cameron by pensioners was “imminent”.

In a tough response to the attacks, Mr Cameron said he was determined to clamp down on what he called a “dangerous radicalisation of our old people” and promised new legislation which would make it easier for security forces to take bus passes and walking sticks away from those OAPs who may be planning further attacks on him or any other government ministers. 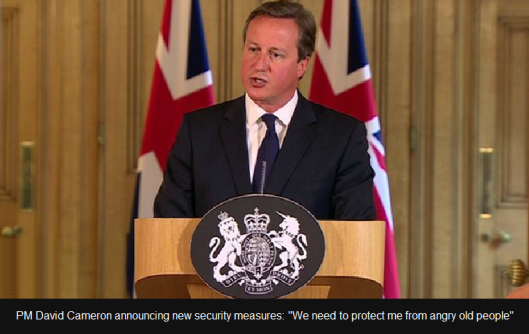 The crackdown on militant pensioners comes just weeks after the Ministry of Defence ordered air strikes against radical OAP strongholds in bingo halls and bowling greens in a fresh drive to defeat homegrown pensioner extremism.