Now this is interesting.

Nick Clegg is the candidate most likely to lie in order to win the 2015 General Election, according to detailed psychometric and qualitative profiling of the main general election party leaders using data captured and analysed using the Praditus Motivation Archetypes Model, which investigates internal narrative by looking at an individual’s needs, knowledge and values.

Praditus analysed the communication strategies of each candidate using data from personal discourses collected throughout the Election campaign. The company then ranked each candidate by individual, social and intuitive values, determining how each would act in scenarios, including the upcoming TV debates.

Here are the results on ‘most likely to lie‘ for each leader (click to enlarge): 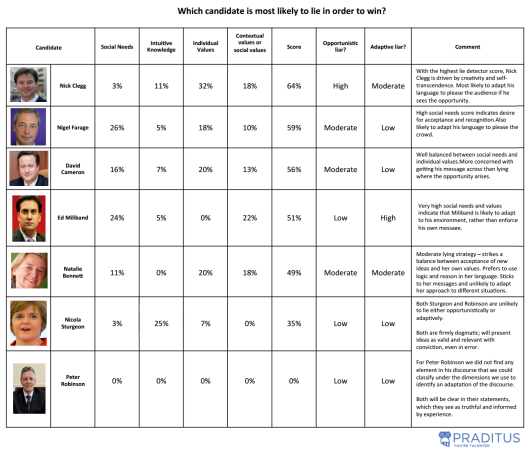 Praditus also used the same model to predict the behaviour and performance of each candidate in the upcoming TV debates, which revealed:

I’m tempted to say that for some of us, the news that Nick Clegg is a liar is nothing particularly new.

But it’s nice to have it scientifically confirmed.

You can take the Praditus personality test yourself here: