UPDATE: you can see the Mail’s reply – including veiled threats – here.

Chair of the Editor’s Code of Practice

Specifically I am writing to complain about an article you commissioned in your own newspaper, the Daily Mail, in which you and your newspaper grossly maligned and bullied two young children, aged 3 and 6 years old.

Although the children’s faces were (poorly) blanked out in your article, the full identity of their parents was revealed so the identities of the two children were in effect not kept secret.

I therefore believe the article was a gross intrusion into the children’s right to privacy and could have a detrimental affect on their education, home life and health.

The following article (which your newspaper has now removed) published on the 30th November 2014, breached several parts of the Editor’s Code of Practice – a body you yourself (bizarrely) chair: 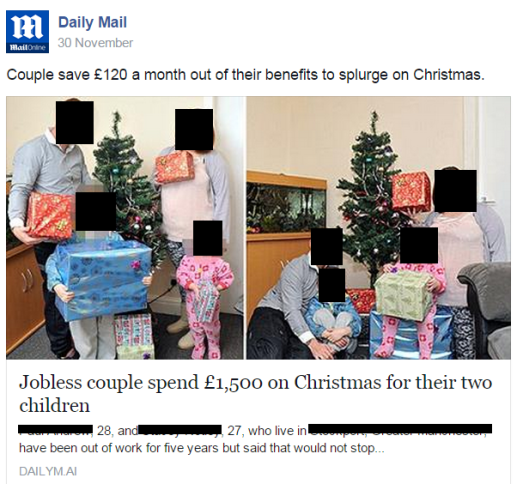 It has been confirmed by the struggling parents who were targeted by you in your article that your colleagues at the Sun newspaper used subterfuge and lies to trick the two children and their parents into inviting reporters into their home and allowing them to take photographs.

You, the Daily Mail and your colleagues over at the Sun newspaper then printed a grossly distorted article attacking, maligning and bullying the two young children and their parents.

Because subterfuge, lies and distortion were used to gain consent from the parents of these children, the subsequent article you printed in your own newspaper breached at least 8 paragraphs of your own code.

Your own article breaks codes 1i and 1iii of your own code of conduct:

i) The Press must take care not to publish inaccurate, misleading or distorted information, including pictures.

iii) The Press, whilst free to be partisan, must distinguish clearly between comment, conjecture and fact.

And it breaks code 3i of your own code of conduct:

i) Everyone is entitled to respect for his or her private and family life, home, health and correspondence, including digital communications

And it breaks codes 4i and 4iii of your own code of conduct:

i) Journalists must not engage in intimidation, harassment or persistent pursuit.

iii) Editors must ensure these principles are observed by those working for them and take care not to use non-compliant material from other sources.

And it breaks codes 6i and v of your own code of conduct:

i) Young people should be free to complete their time at school without unnecessary intrusion.

v) Editors must not use the fame, notoriety or position of a parent or guardian as sole justification for publishing details of a child’s private life.

And it breaks code 10ii  of your own code of conduct:

ii) Engaging in misrepresentation or subterfuge, including by agents or intermediaries, can generally be justified only in the public interest and then only when the material cannot be obtained by other means

I fully expect you to have a strong word with yourself and your colleagues at the Daily Mail and the Sun, have a good laugh about it, and then carry on bullying struggling British families while you go on living your opulent lifestyles and going on your expensive holidays as if nothing has happened.

I have also copied this letter to your puppets at the IPSO so they can also pretend to be seen to be doing something about it.

I’ll let you know if I get a reply.