The level of threat from the British electorate to the continued existence of the UK government has been raised from substantial to severe, Theresa May, the home secretary, has announced.

The move to distract the electorate comes after figures were released showing a large rise in net immigration to the UK which experts say could make attacks on government ministers in the near future “a real possibility“.

This also means that an election defeat in the near future is considered to be “highly likely“, and although May said there is no evidence to suggest a change of government is imminent, senior members of the Cameron cabinet are keen to make sure the public is fully distracted in the face of a reported threat from militant Euro-sceptics on the right-wing of the Tory Party.

The home secretary said some of the plots against the government were likely to involve hard-line back-bench Tory MPs and that the decision to raise the official threat level is “related to developments in UKIP, who may be planning attacks against the UK government“. 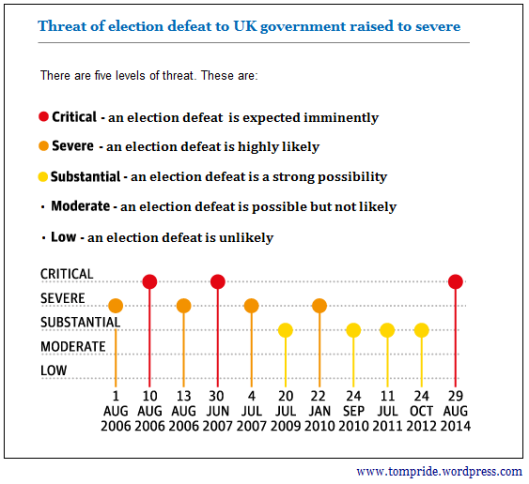 Her announcement is expected to be followed shortly by a Downing Street statement in which David Cameron is expected to urge the public to remain vigilant of suspicious activity by radical Tory MPs and to report any indications of further defections to the authorities.

Is Douglas Carswell now against the bedroom tax? Or UKIP now for it?

NHS should be run like Tesco: Tory MP who defected to UKIP

I’m NOT prejudiced – some of my best friends are UKIP