(not satire – it’s the Church of England!)

The Diocese of Chichester has just published a detailed report on child abuse which was commissioned by the former Bishop of Chichester, the Right Reverend Dr John Hind.

To its author’s credit, the report unflinchingly criticises the way child abuse allegations were handled by senior members of the church.

The only problem is – the report was actually completed way back in 2004.

Which means the diocese has withheld its publication for a full 10 years: 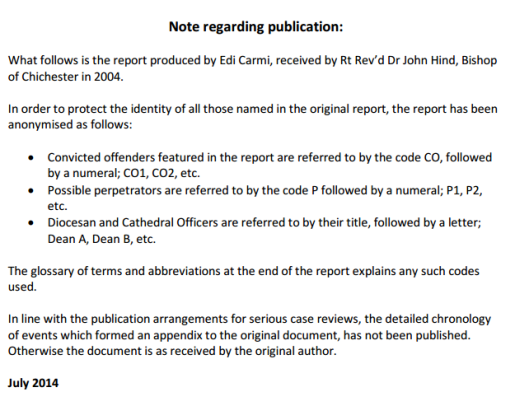 Even worse, all of the identities of the people involved in the abuse have been anonymised  – including those people who were convicted of child abuse offences.

If this is the Church of England’s idea of openness when it comes to allegations of child abuse – then God help us all.

Awkward. Butler-Sloss once said leaders have “sovereign” right to immunity and anonymity

How MI5 vetted Savile. And decided paedophilia was nothing to worry about.

High level child abuse cover-up? Why has Theresa May barred a US journalist from the UK?

Cock-up, cover-up or conspiracy in the North Wales child abuse scandal? You decide.