The Russian president, Vladimir Putin, has hurriedly agreed to pull back his forces stationed in the Ukrainian Black Sea peninsula of Crimea after British Prime Minister David Cameron said on Sunday he will be staying away from the Paralympics in Sochi and not even watching it on telly in protest at Moscow’s moves to annex the peninsula in all but name.

Despite Ukraine mobilising for war and Washington threatening to isolate Russia economically, President Vladimir Putin only showed signs of nervousness and agreed to loosen his iron grip on Crimea after Mr Cameron announced he would also be instructing other UK government ministers to watch old episodes of Strictly Come Dancing instead of the Paralympics if Moscow refused to back down.

And in an illustration of how seriously the UK government is taking the biggest threat to European security since the end of the Cold War, Mr Cameron underlined his hard stance against Moscow’s actions by agreeing to catch up on the last series of The Only Way Is Essex over the next few weeks.

A spokesman said Cameron would be speaking to U.S. President Barack Obama, Polish Prime Minister Donald Tusk and Lithuanian President Dalia Grybauskaite to assure them he is even prepared to contribute his extensive collection of classic British musicals on DVD if any of them would prefer to watch a film or two instead of the Paralympics – provided they agreed to take good care of them.

Here’s the real reason Putin’s got Cameron in checkmate over Ukraine: 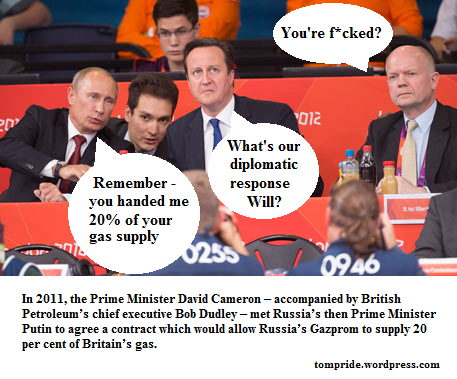 7 thoughts on “Ukraine: Putin backs down after Cameron threatens to watch Strictly instead of Paralympics”