Government statistics reveal that between January 2011 and November of the same year, 10,600 sick and disabled people people died within six weeks of their benefits having been ended after being wrongly assessed as fit for work by ATOS.

As an example of how toxic the name ATOS has become even to itself – ATOS recently changed its name in the UK to OH Assist as an attempt to distance itself from the scandal.

And in a surreal, Kafkaesque comment worthy of the best satirist, OH Assist has taken to denying it is ATOS – while at the same time admitting it is ATOS.

Here’s a reply from OH Assist to a critic on Facebook: 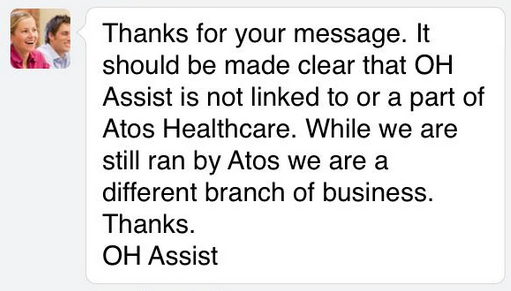 In fact, OH Assist is not just ‘ran’ by ATOS – it is ATOS. Here’s a screenshot from the OH Assist website: 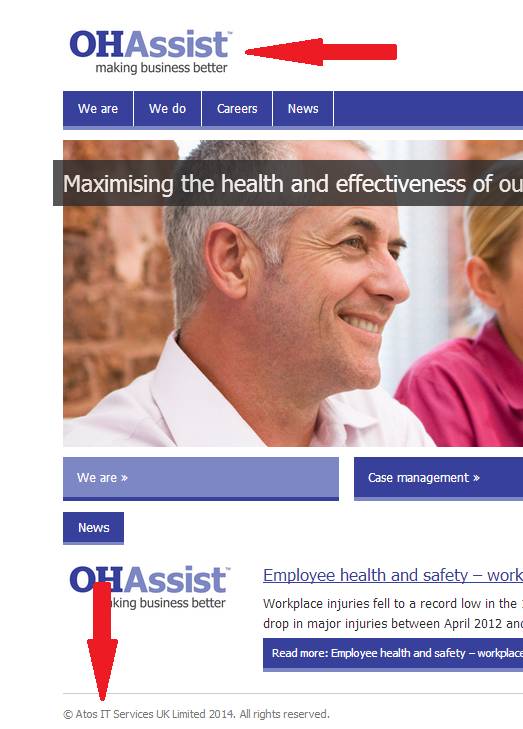 Mind you, can’t blame ATOS really. If I’d been responsible for tens of thousands of deaths for the sake of a lucrative contract – I’d want to hide my identity too.

Big thanks to ATOS Miracles for the heads up on this.

ATOS to reduce ‘fit for work’ test to one question: “Are you alive?”

Toby Young – disabled children should be excluded from schools

29 thoughts on “ATOS denies being ATOS (not satire!)”