Senior Tories are openly accusing the police of lying during the so-called ‘plebgate’ incident.

A very different reaction to how senior Tories reacted when people suggested the police may have lied and been part of a conspiracy to smear the victims of the Hillsborough tragedy.

They called those allegations “contemptible”.

Here it is in black and white in a 1996 letter from senior Tory ‘sir’ Bernard Ingham: 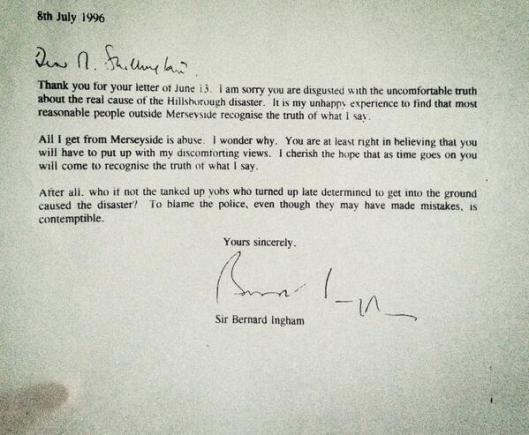 Senior Tories also told relatives of those who died to “shut up” about the Hillsborough disaster.

This completely different reaction from senior Tories has of course nothing to do with the fact that the victim of ‘plebgate’ was also a senior Tory whereas the victims of the Hillsborough disaster were obviously not.

They were just, well ….. plebs I suppose?

For the real facts about the Hillsborough tragedy – have a look here:

What’s the bad link between the Hillsborough and child abuse scandals? Royal and Sun Alliance

Name the guilty. The Sun’s ‘source’ for its Hillsborough story was ….. Tory MP Sir Irvine Patnick.

Don’t think Chief Constable Bettison should resign over Hillsborough? You will when you read this

Please feel free to comment – you don’t need to register and I’m extremely minimal with the moderating.

If you click on any of the buttons below, you can share this article with other people. Thanks: