The embattled International Cycling Union was today meeting in an effort to draw a line under the Andrew Mitchell ‘plebgate’ affair amid allegations that being a dope is widespread among high-profile cyclists and calls for a change of the organisation’s leadership.

A special meeting of the UCI’s management committee was called to discuss the “exact sporting consequences” of the fallout from the actions of Mitchell who threatened to bring the whole of cycling into disrepute by acting like a complete tit while in possession of a bicycle. 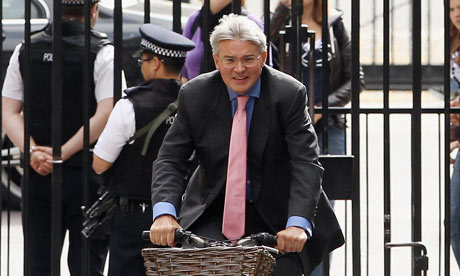 Mitchell was caught acting like a twat while on a bicycle

A UCI spokesperson on Monday stressed the organisation’s determination to stamp out dopes like Mitchell within the sport with a series of measures including an announcement that the UCI would ratify the decision of the UK Anti-Dope Agency to ban Mitchell for life for using banned words on a bicycle and seek to enforce a life-time ban on him doing a perfect impression of a total prick while wearing bicycle clips in public.

Is Cameron a Secret Stalinist? Or just a Toffee-Nosed Pillock?

By the way, if you click on any of these buttons below, you’ll be doing me a big favour by sharing this article with other people. Thanks: