Scientists have identified a peculiar-looking new species of living media fossil, which sucks the will to live out of every living being it comes into contact with.

The bizarre media creature – described as a cross between a bird, a vampire and a dinosaur – has been identified from fossils found buried on a satellite television station by scientists who say the species should have died out millions of years ago.

The species – which scientists have labelled the Kayax Burleyus  – is remarkably similar to a domestic rat and is said to be utterly ruthless and to feed exclusively off the emotions of human beings. 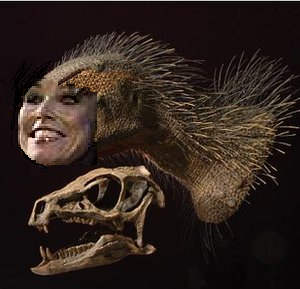 It has a parrot-like voice with two stabbing talons at the front behind a microphone for slicing up innocent people it gets close enough to interview.

The latest discovery comes at a time the callous vampire dinosaur appeared on satellite news attempting to suck the life out of its unsuspecting human prey.

OFCOM rules Murdoch ‘fit and proper’ to own David Cameron

Hillsborough – cock-up or conspiracy? (PS – anyone know if Rupert Murdoch’s a freemason?)

By the way, if you click on any of these buttons below, you’ll be doing me a big favour by sharing this article with other people. Thanks: