Is an official police twitter account providing links to a political blog by a LibDem councillor an indication of political bias?

I think it’s a very good idea that local police are engaging social media such as Facebook and Twitter to communicate with residents.

Here’s an example from Consett in County Durham. Lots of useful information and advice on crime prevention and updates on policing issues: 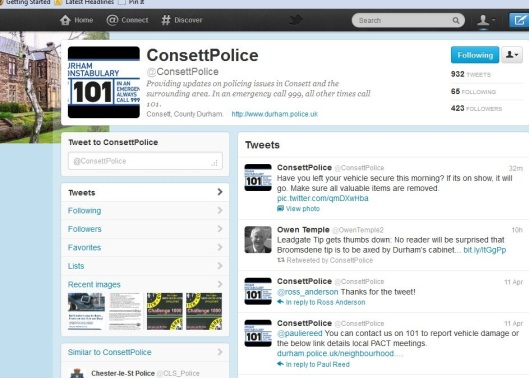 If you look carefully at the above screen shot, one of the tweets on this official police twitter account thanks a user – @ross_anderson for a retweet.

Well OK, Ross Anderson describes himself on his Twitter account as a ‘Liberal Democrat supporter & campaigner’ but there’s nothing wrong with a thank you when someone retweets something, is there?

It’s a retweet by the police of someone called @OwenTemple2 with a link to an article on his blog. Here’s the full URL:

As you can see, the blog turns out to belong to Cllr Owen Temple, who happens to be Liberal Democrat County Councillor for Consett North.

And the article it links to has nothing to do with policing matters, in fact it happens to be an article critical of a decision made by the Labour-held administration.

Consett North is a LibDem / Labour marginal and Cllr Owen Temple is up for re-election in a few weeks time. At the last election in May 2008, there were only 110 votes between the Labour and the Liberal Democrat candidates:

So what on earth are the police doing linking to an openly political article on a party political blog using their official twitter account?

Call me old-fashioned, but if the police have to insist on breaking their pretence of political neutrality and supporting one political party over another, the least I would expect is that they went about it in a slightly more underhand fashion.

What do you think?

Please feel free to comment – you don’t need to register and I’m extremely minimal with the moderating – so fire away: