The Prime Minister, David Cameron, hit back at criticisms that his government wasn’t taking the fuel crisis seriously enough by announcing an emergency photo shoot of himself playing a game of badminton in the Rose Garden of Number 10 today: 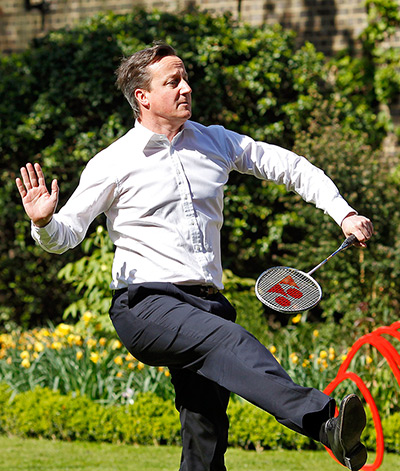 The Prime Minister announced other emergency measures to deal with panic fuel buying and possible petrol shortages by declaring he would be photographed playing a game of rounders against a team picked by the Chancellor George Osborne in Downing Street outside their respective front doors tomorrow as well as a game of five-a-side against the Liberal Democrats in the park round the corner on Saturday.

This is a real photo from Cameron’s press conference in the Rose Garden today.

Erm – he needs a press officer really badly, doesn’t he?

Please feel free to comment – you don’t need to register and I’m extremely minimal with the moderating – so fire away.

By the way, if you click on any of these buttons below, you’ll be doing me a huge favour by sharing this article with other people. Thanks: