I’ve just discovered (thanks to Lauretta Pearson) that the name Gideon actually means “Destroyer,” or “Feller of Trees” in Hebrew.

This isn’t satire by the way – it really does:  http://en.wikipedia.org/wiki/Gideon

Gideon, of course, was the Chancellor George Osborne’s original name before he decided to change it – obviously we now know to put us off the scent.

I’m not particularly religious but it makes you wonder if the ancient Israelites were trying to tell us something all those years ago.

Or maybe George’s parents already knew their son’s future destiny when they named him.

Even more amazingly, it seems that Marvel Comics were also trying to warn us about the evil destructive powers of our Chancellor. Well before George managed to get his hands around the throat of our economy, Gideon also featured as one of the 4 horsemen of the apocalypse in Marvel Comic’s cult story ‘KING OF PAIN‘. 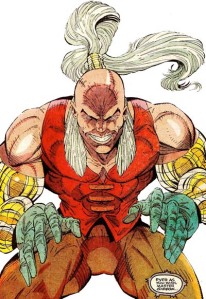 Blimey! I’m going to have to start searching chapters of the Old Testament and back copies of X Men, just in case there was anything or anyone else in our present leadership they were trying to warn us about.

Any experts on the Bible or Marvel Comics know if there are references to a character called Dave in there? Or Jeremy? Or Iain?

George Osborne Is Not A Wanker – He’s A Genius!

What if George Osborne doesn’t know he’s the Chancellor?

Loss-Making Osborne To Be Sold Off to US Conglomerate

Government – clocks to go back 64 years this Sunday

Loverat George Osborne’s Top 10 Excuses For Why He Cheated On The Economy:

If you click on any of these buttons below, you’ll be doing me a favour by sharing this article with other people. Thanks:

81 thoughts on “Did you know the name Gideon is Hebrew for ‘Destroyer’? No, really.”